Building to the Sky

Mankind’s reach toward the sky, depending on your point of view, is either a sign of his hubris or of his indefatigable ingenuity. Our architectural ambition has grown alongside our technological expertise, resulting in thousands of years of increasingly imposing facades. Modern skyscrapers make cityscapes around the world instantly recognizable, but our rise to the heavens is well documented throughout history.

The current tallest building in the world is the Burj Khalifa in Dubai. It took five years and 1.5 billion dollars to complete, but it stands now as a lasting testament to human ingenuity. It reaches to a height of 2,722 feet, or 163 stories. The primary contractor of the building was Samsung C&T of South Korea, which finished construction of the exterior of the structure in 2009. It officially opened in October of 2010, and now serves as the crown jewel in Dubai’s main business district.

It wasn’t always so, however; the grand opening of the building unfortunately coincided with the worldwide financial crisis of 2007-2012, meaning that Dubai had a great deal of difficulty renting out space inside. The building’s name was originally Burj Dubai, but following economic intervention from Abu Dhabi, the building was renamed to honor United Arab Emirate President Khalifa bin Zayed Al Nahyan. As a result, the building is a testament not only to architectural daring, but also to cooperation.

Long before the modern skyscraper was even a twinkle in the eyes of an architect, we had a much older, but no less impressive achievement: the Great Pyramid in Egypt. While there is no solid definition for the word “skyscraper,” there’s no question that the Great Pyramid, built in 2500 BC, would qualify: standing an imposing 455 feet tall, the famous structure took between 10 and 20 years to complete, using techniques that even today still stymy modern engineers. Each of the stone blocks that comprise the pyramid weigh, on average, 2.5 tons.

In modern currency, the cost to build the pyramid – now one of the world’s wonders – would have been nearly five billion dollars: more than three times the cost of the Burj Khalifa. Today, millions of people travel to Egypt each year to visit the Great Pyramid and its neighboring monuments in the Giza pyramid complex. For better or worse, what once were tombs – places of quietude and contemplation – are now bustling hubs of human activity.

…And Everything In Between

In between these two structures are thousands of years of architectural innovation. While it remains one of the most recognizable buildings in the world, the Empire State Building is a decidedly mid-range skyscraper, measuring in at about 1,454 feet. It does serve as a reminder that architectural distinctiveness and nostalgia are sometimes more powerful than sheer numbers.

Likely the most auspicious construction project in modern times was the recent completion of One World Trade Center: the replacement for the twin towers that were lost all those years ago on September 11th. Standing 104 stories tall and carrying a price tag of $3.8 billion, it is neither the tallest nor most expensive building ever built, but it stands as a definitive testament to the resilience of the human spirit. 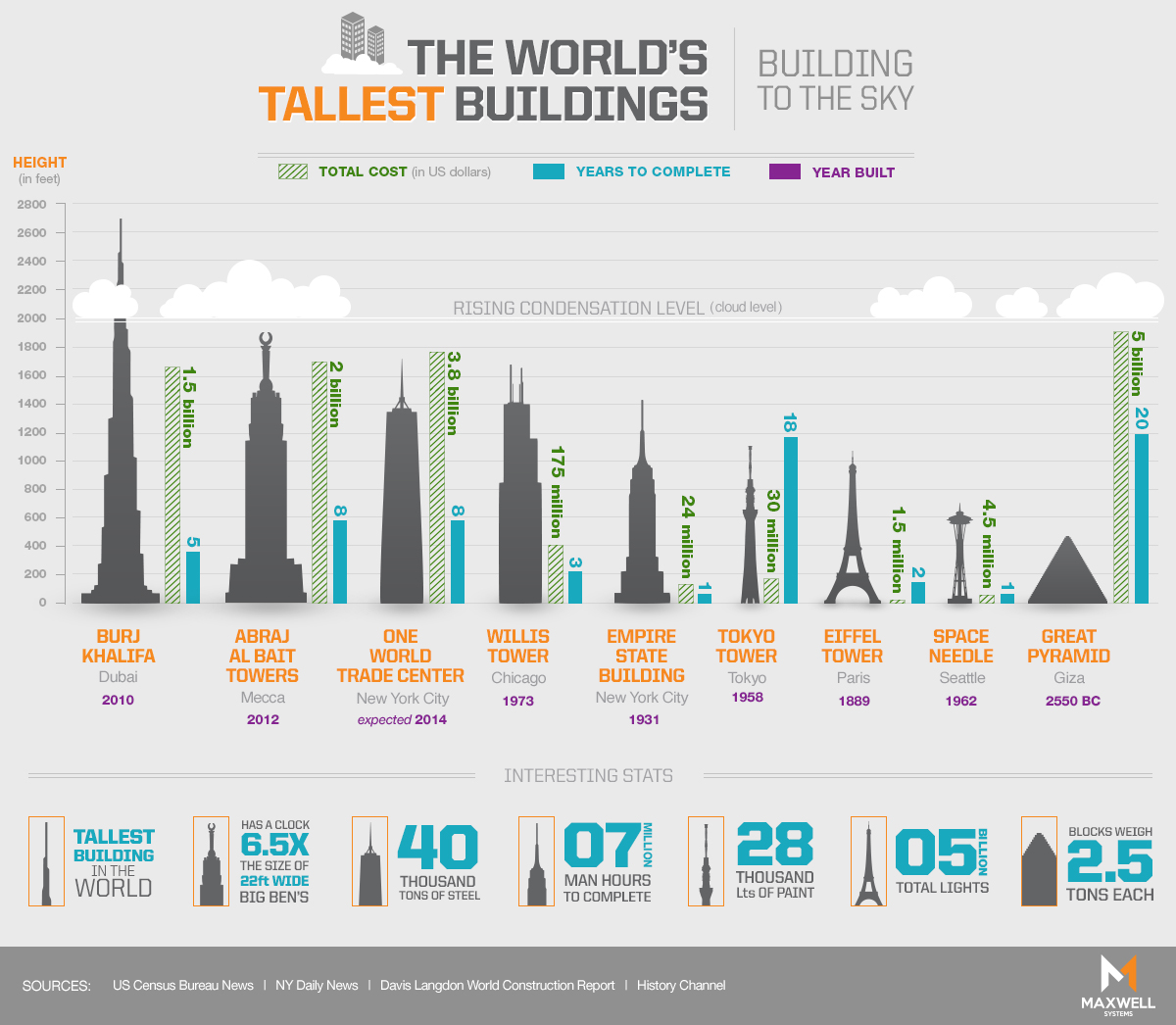