What Countries Struggle For Food? [Infographic]

This is definitely a question that is of interest for so many people from all around the world. Unfortunately, we are faced with huge problems when referring to people that cannot actually afford food. The infographic that is presented below will highlight various things that you may not be aware of at the moment. It will cover various aspects that are of great interest because of the fact that many of the statistics presented are quite shocking for most people.

The food based infographic below is divided in 3 categories based on the economic status of the countries that are covered. Obviously, not all the countries are covered, only the top ones from different points of view. You will quickly notice that even in a country like USA, where we have a lot of money that is available for food, struggling appears with people finding it difficult at times to deal with the struggles of having food to eat.

Obviously, the biggest problems appear when referring to the countries that are currently developing. That is where it is really hard for much of the population to afford putting food on the table. We can say the same thing about the emerging markets since the differences are not as high as we may believe at first glance.

We recommend that you go through the entire infographic below. Start with the left column. It will present the key that is used to present the statistics and will highlight the problems that are currently covered in it. After that, look at where countries like USA or Germany fit on the list of the countries that struggle with getting enough money to be able to afford food. You will definitely be surprised by some of the countries that are listed, especially USA. Other countries like Uganda or Nigeria will surely not be something that is surprising since we have known for a really long time that food related problems exist in those countries. It is definitely a shame to notice that there are countries in which at least half of the population struggled to put food on the table for the family in the last year. That is something that should stop. 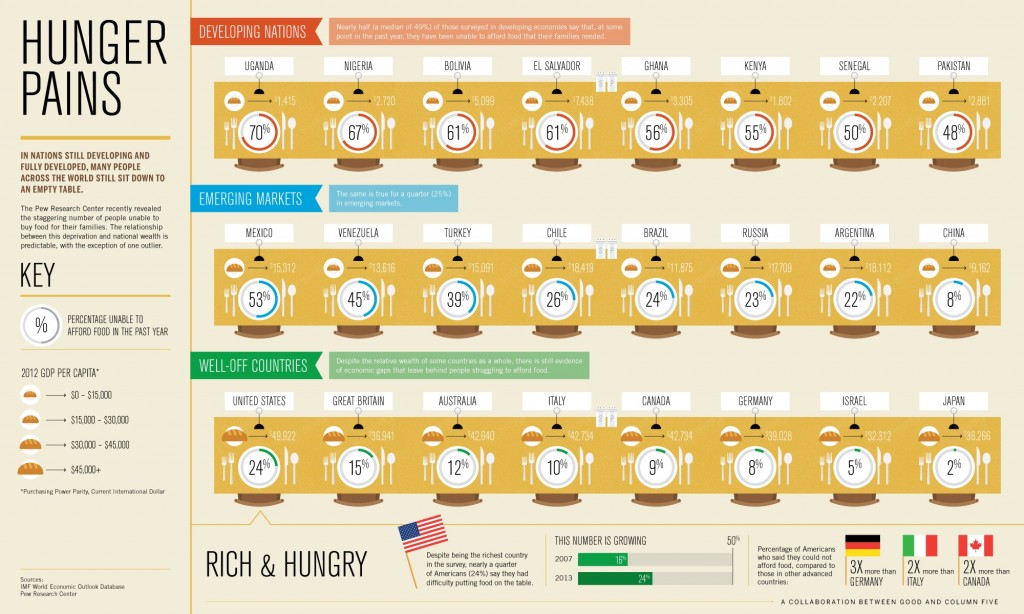