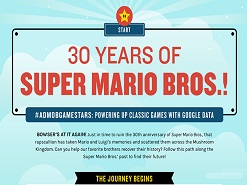 The gaming industry changed a lot in the past thirty years. That is definitely the case. You have games that are loved and games that are hated. No matter the case, the truth is that some games are known by every single person that ever touched a computer. There is no game more iconic than Super Mario Bros. It now reached 30 years and the official Google blog put together the infographic below, highlight some really key moments in the life of the video game franchise and Google Search related facts that nobody knew about till the release of the graphics.

Super Mario Bros is a game that initially appeared in the year 1985. Nobody expected it to be as successful as it turned out to be. The game is one of those that actually managed to help the entire video game industry to become the power it is today. As the infographic highlights, out of the different Super Mario videogames that were released, only a couple were not successful. One of them actually managed to reach the level of the most sold video game in history.

Besides talking about the various Super Mario Bros video games that exist at the moment, the infographic is really interesting as it highlights some facts that only Google knew till know. For instance, do you know what the most googled phrase is in a correlation with Luigi? You can easily learn a lot about Super Mario and you can understand how much it managed to change the world.

There are not many video games that managed to reach such a huge popularity. It is something that we all understand at the end of the day. Super Mario Bros is highly successful and many gamers keep talking about the game even now after 30 years passed. New game versions will appear in the future for sure and all video gaming platforms will be covered. You will surely love the new games that are going to appear in the Super Mario saga in the future. Although there were some situations in which some game fails, nobody can deny the importance that this saga has for the video game industry.