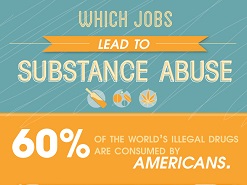 The tolls of substance abuse on an individual are obvious. It can lead to serious problems with one’s health, relationships, finances and ability to hold a job among so many other things. But the problems caused by substance abuse extend far beyond the impact on an individual’s life. The workforce suffers enormously from substance abuse and this results in a huge financial toll on our economy, according to a new infographic by 12 Palms Rehab.

As this infographic details, 77% of illegal drug users have jobs. This kind of substance abuse leads to employees skipping work more often, sometimes as much as once every ten days, and are often late to work and less productive on the job. The financial toll this takes on the workforce is staggering. It’s estimated that this lowered productivity due to substance abuse caused business in the US to lose an estimated $96.8 billion between 2000 and 2004.

Not only is the monetary cost worrisome, the lack of productivity also causes businesses to fall behind and suffer. Certain industries are more prone to substance abuse problems. Entertainment, recreation, manufacturing and construction all have higher rates of alcohol abuse and food service and accommodations have high levels of illicit drug use.

Substance abuse also leads to many health problems. Not only do people suffer from hangovers and mild sickness from abusing drugs and alcohol, it can also lead to more serious health issues. Alcohol abuse can cause a variety of problems, from ulcers and stomach problems to liver cirrhosis and other serious diseases. Drug abuse can cause short-term problems such as lethargy and inability to focus to much more severe problems such as mood disorders, cancer and brain damage. The economic cost to society as a result of substance abuse and addiction was estimated at $559 billion, including health care costs, crime and lost productivity.

These health problems impact the workforce in an extreme wa

Adrienne is a writer interested in health and career development.

We beleive this infographic helped you to understand which jobs lead to substance abuse.