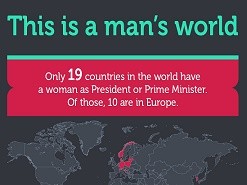 This topic is definitely one that is controversial. It is really important that we learn all that you can about the various cultures of the world in order to understand differences that exist at the moment between mentalities. Unfortunately, in most cultures from around the world the role of the women is minimal. There are still countries in which women are seen as objects. With this in mind, it should come as no surprise to notice the fact that the details in the infographic below are quite disturbing, especially if you believe in equality.

The really popular song This Is A Man’s World by James Brown is still as accurate as it was when it was first released. We do want to think differently but that is definitely not the case. Just take a look at how many countries have a woman as a prime minister or as a president. You will quickly figure out the fact that the number is a whole lot lower than what many think. We only have 19 countries that fit the list. That is definitely not as much as many may believe.

Good news come from the statistics offered by the infographic though. If you take a quick look at the second main section, you will notice that we are faced with an increase in the number of women that work as an European parliament member. While 25% may not seem like much in the year 2015, it is still a lot more than what existed in the past.

Obviously, a lot more work needs to be done in order to highlight the fact that equality is something that is normal. However, it is definitely something that is possible, with a lot of work. What you have to do is basically read all that you can about the various opportunities that are available when looking at information. It is information that basically helps us to change the way we think and see women as being equal to men when looking at so many different job opportunities that exist. While a lot of people from various countries still believe that this is not the case, the truth is that this mentality has to change. Analyze the infographic to learn more about this sensitive topic.