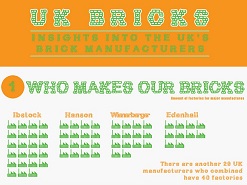 Despite the economic situation in the UK the brick industry is still huge and diverse as represented by the varied process used, areas of manufacturer and amount individual manufacturers in the market. This is always likely to continue as the demand for bricks is ever present, even if demand increases and lessens in different economic times.

This infographic was therefore created to give an overview of the UK brick industry and it is worth noting that it was solely created from the extensive resource at Brick Hunter. To illustrate the key parts of the UK brick industry the infographic has been split into four main sections which are: Who makes our bricks, Status of the factories, What do they make and Where are they based. More information on each section is provided given below.

Who makes our bricks

There are 102 brick factories in the UK and over half of them are owned by the four major manufacturers (Ibstock (who has the most factories in total), Hanson, Wienberger and Edenhall). There are only 33 different manufacturers in the UK which means the majority has more than one factory, this is because the setup cost to create a factory redistricts new companies from joining the market.

Status of the factories

The economy has hit the building trade hard in the last 5 years which has, of course, resulted in a lower demand for bricks. This lowered demand can be seen in the fact that over 25% (26 of 102) of the factories are now closed or dormant with only 76 continuing to operate.

What do they make

There are 5 major processes for brick manufacturing in the UK; Wirecut, Machine Made, Pressed, Hand Made and Slop Mould. With the increase in technology and manufacturing processes it is not surprising that only 8 factories still made bricks by hand, whereas the most popular method, wirecut, has 45 factories using the process, which is nearly half of all the factories.

Where are they based

The centre of England has always been the hub of UK brick manufacturing and as seen on the map created Yorkshire and the Midlands are the two areas with the majority of factories (with Leicestershire, Nottinghamshire and Derbyshire also being major areas), although there are large pockets in the South West and North West of England as well as central Scotland.

This infographic give you information about the basics of UK brick industry.