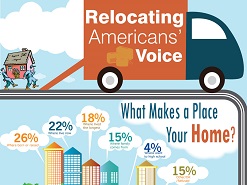 Relocation currently is not what it was an era ago, when most of the people had lesser possessions. In the present scenario, people consider not only ways to get their clothing, house items, books, as well as their kids’ toys and pets from one location to another. Americans have different views about relocating in the U.S. As per the below studies, there is a wide differentiation what Americans feel about relocating in the U.S.

The above facts and figures state that relocation is a thoughtful process and takes places with a wise decision. If you are planning to relocate in the U.S, you can get in touch with a reputable relocation service company that can help you make your relocation day hassle and stress-free.

This Infographic is provide by www.redlinemovers.com.