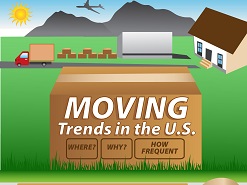 Moving is no small feat. As exciting an adventure as it is to go house shopping, after the purchase there can be an unsettling anxiety about your impending move, especially if you are moving to a new city or state. But making that fresh start and feeling those inescapable butterflies at the thought of meeting new people and discovering new places is—quite simply—worth it.

However, most Americans don’t pick up and leave on their own volition. Whether to be closer to a new job or family, for cheaper housing, better weather, or a breath of fresh air, Americans are moving at an unprecedented pace. In 2010, 14.8% of moves were to out-of-state homes. Some states and cities drew more inbound (or outbound) moves. New Jersey has Americans fleeing for new horizons. In tracking moves to and from New Jersey, a study found that 62% of moves were outbound, meaning the state had an excessively higher ratio of Americans leaving compared to moving in. Illinois came in at a close second with West Virginia coming in third for highest outbound to inbound moves ratio.

So where are Americans moving? Of all places, Carmel, Indiana has become a hot spot for real estate. So has McKinney, Texas, though that is a little closer to Dallas, a blooming city.

But if you’re considering jumping ship (or rather, jumping state), you’ll want to set a few plans and goals for yourself—such as finding a job and, if you have kids, communities with quality schools. If you’re already ahead and have secured a new job or community where you want to relocate, create a checklist for your move. Organize your belongings by fragility, stat researching moving options, and set a budget and target date for your move. But of course, have a Plan B.

But maybe you’re not sure where you want to move… or you’re just curious how Americans are moving. Well, that’s why we’ve got this handy infographic for you! You can see U.S. moving trends and learn all about portable storage below. So sit back, relax, enjoy and start planning your next dream move!

This infographic about the moving trends in USA is created by www.gominis.com.