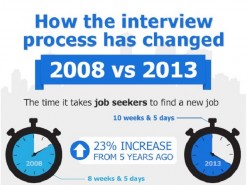 Job seekers are in for a harder and more difficult recruitment process according to recruitment agency Randstad. Their newly published infographic provides a strong summary of the lengths and tactics job hunters and employers face in 2013 compared to 2008.

Based on interviews with their clients, Randstad has found that job seekers are spending two weeks longer to acquire a new job than in 2008. Employers share a similar struggle, with the time it takes increasing by 71% over the last five years.

People who are job hunting now spend 10 weeks and five days looking for a new position. The process not only takes more time but it is also more difficult. Interviews are now 27% longer, with candidates spending seven hours preparing or taking part in interviews, an increase of 1.5 hours compared to five years ago.

Effort put in outside the interview is another key component. According to Randstad research, the majority of UK applicants relied on internet research (36%) in their preparation. However, those who went after personal insight by speaking to former or current staff members (20%) secured a position within eight weeks and three days. This is two weeks quicker than the job seekers who solely relied on internet research.

Other forms of preparation included speaking to colleagues in the industry, recruitment consultants and reviewing the company’s website.

As well, now nearly 30% of roles require some form of aptitude or technical testing, double the 14% which required it in 2008.