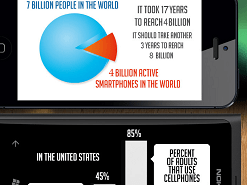 Smartphone’s have gained a lot of popularity over the years. These gadgets have not only become a medium to stay in touch with people but you can also explore a wonderful experience with the appealing apps and games. In the recent years, the number of Smartphone users has increased by leaps and bounds with the number reaching to 1.08 billion. Out of 1.08 billion people, more than 91.4 million are from the United States showing that they are more techno savvy and familiar with the technology. The excellent features of Smartphone’s have definitely made the people crazy with different brands like Samsung, Apple, HTC, and Blackberry introducing new series to seek the attention of the people.

During the recent years, the mobile industry has undergone a huge transformation in terms of technology and introduced a variety of operating systems that would enhance the user experience. The increasing market trends show that the mobile users have become techno savvy and are looking for superior products; software’s and services to come their way.

There are around 5 billion mobile users around the world with 1.08 using the Smartphone’s. Among the Smartphone users, the number of Android users is much higher as compared to the other owing to its user friendly interface and appealing graphics that catch the attention of the people. At present about 46.9% of the market consist of Android users and with the launch of Kit Kat Android OS, there are chances that Android will definitely rule the market.

With countless features and functions available in the gadgets, the Smartphone’s have become the first preference for the young generation as well as business professionals. Through these mobile devices, you can easily accomplish the little tasks and stay connected all throughout the day. This is the reason that around 89% of the mobile users are active all through the day. 92% of these people use it to communicate with their friends while 84% use it to browse the internet. So you can say that Smartphone’s are a complete gadget for the users.

As compared to the adults, the young generation is influenced by the new technologies and that is why they love to try new features and apps. According to the statistics it is found that 50% of the people using Android Smartphone’s come in the age group of 16-34. Though this fact may be a bit surprising but the reality is that the new generation has a lot of craze when it comes to technology.

The young Smartphone users comprise of both the males (53%) and females (47%). Both the groups are fond of using Smartphone’s and highly impressed with the multipurpose functions that such devices include. Owing to the innumerable features only, Smartphone’s have become the first choice of the individuals. These are affordable and packed with excellent features to grab the attention of the people.

So as per the statistics it is clear that Smartphone’s are surely a great selection and are ruling the market as well as the hearts of the people.