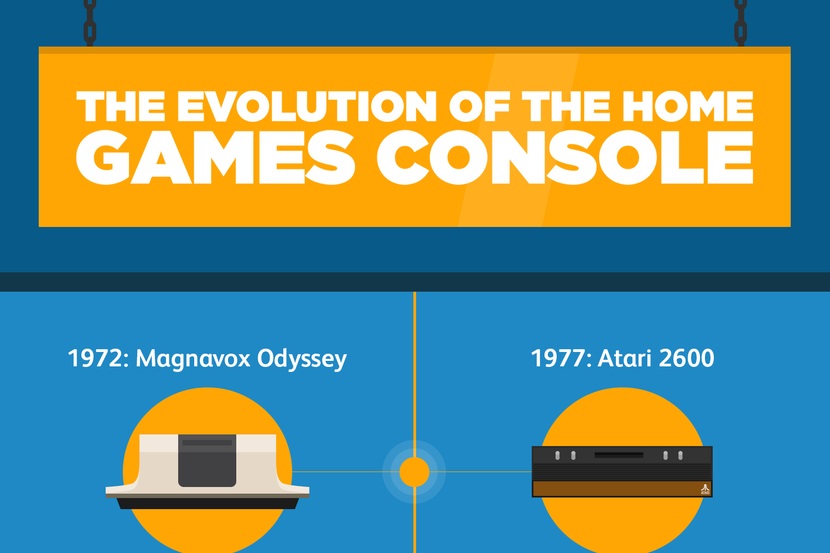 Home games consoles are huge right now, with millions of homes having at least one hooked up to a TV set. It is not at all difficult to understand why this is the case since everyone wants to have fun and games reached a huge level of realism while technology keeps evolving at an incredible rate right now. However, even if the home games console of modern times are simply incredible, few people know where it all started. In many cases we see people thinking that the Atari 2600 launched in 1977 was the very first home games console but this is not actually the case, with the Magnavox Odyssey appearing 5 years below, being the first official console, one without recorded sound and with incredibly primitive graphics.

The Evolution Of The Home Games Console Infographic below is all about letting everyone know about the actual history of the games console. It features all the important moments in technology history, with all the steps that were taken by various manufacturers to work towards what we now see as being the standard.

You will definitely know many of the consoles that are listed, especially those after 2000. However, there are some surprises that you will see. At the same time, it is quite possible that you forgot about some of the home games consoles that are listed in the infographic since they were not great sellers but did manage to offer something that was really special upon the launch. The best example of that is the 2001 Nintendo Gamecube, the follow-up to the Nintendo N64, the very first device ever in home gaming that utilized optical discs as a storage medium. We did move way past that with the evolution of cloud technology and internet connectivity but it is a certainty that every single gadget highlighted in the infographic has its very own part in history. Hundreds of millions of gamers were inspired and now use these consoles, some for fun and even some to make money through a gaming career.

Let us know what your favorite one is and what you think drastically changed the video game industry.