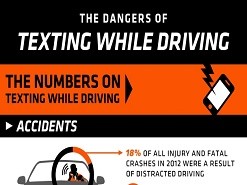 There are so many campaigns out there that try to raise awareness to how dangerous it is to drive and text at the same time. Unfortunately, so many lose their lives every single year because of the fact that the driver simply did not pay enough attention to what he/she should have: the road. The Dangers Of Texting While Driving inforgraphic tries to highly exactly what dangers appear and should make it pretty clear that you have to avoid this nasty habit.

Due to the evolution of technology and the really high popularity of the smartphone or mobile devices in general, we can say that the problem of texting while driving is even higher than it used to be. Nowawadays, people send messages, check their email, comment on Facebook, answer to WhatsApp calls and simply end up being much easier to distract than they used to be while driving. Technology does save lives but it can also lead to a loss of lives.

Did you know that close to 20% of the fatal and injury crashes in the year 2012 were caused by being distracted while driving? 11 percent of the drivers that were involved admitted to having been involved in a texting conversation and were aged 18 to 20. As you can easily imagine, the statistics are, most likely, a lot more grim right now due to the growth of the technology people can use to text while driving.

The infographic below provides a lot of really interesting information that should clearly highlight why you should always keep your eyes on the road. As an example, you will learn that whenever driving with a speed of 55 miles per hour, you end up driving blindly the equal length of a football field when you look at your phone for just 5 seconds? It is not that little of a distance if you think about it like that, is it?

Take a look at the Dangers Of Texting While Driving infographic and simply do what is responsible when you absolutely need to text: pull over! You are not only endangering your life. Those that travel with you and other people on the street are also in danger.