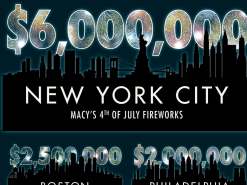 When it comes to fireworks shows, there is nothing that is as impressive as the 4th of July! You basically see fireworks all around USA and every single show seems to be more interesting than the year before. While some of the shows are so impressive than they are really tough to replicate, others are quite fascinating and as technology evolves, different options become available for those that are interested in a new show.

Pyrotechnics become a necessity and this is basically the busiest day in USA for companies that provide fireworks shows and for manufacturers. The infographic below is all about the 4th of july fireworks business in USA. We are sure you will be surprised to see the figures that are highlighted below. For instance, did you know that the most expensive fireworks show ever for 4th of July cost $6 million in New York? Many consider the Macy’s 4th of July fireworks show as the one must-see all around the country.

People are also buying a lot of fireworks and we should not just think about the pyro shows that are organized by professionals. Statistics show that in 2013 US citizens spend over $645 million on fireworks. The infographic below also highlights the interesting spending trends of various Americans based on age. That is the part of the infographic that we found as being really interesting. We had no idea that US citizens aged 18 to 24 spend over $60 on fireworks for the 4th of July while seniors only spend $15.

The huge “did you know” moment about this fireworks business infographic is found right at the end so make sure that you take a look at everything that is highlighted. The end talks about the most impressive of all fireworks shows ever held in USA. It might actually be the biggest fireworks show ever and it is not by all means recent. It took place on the 100th anniversary of the construction of the Statue Of Liberty. That was in 1986. This was a fireworks show that actually took 1 year to plan. 3 fireworks companies were involved and it is enough to say that there were over 220 miles of cables that were installs to understand how huge this was.

On the whole, this is quite a great infographic that displays so much about the fireworks industry in USA. It is something that every single American should know and even those that are from other countries will surely find the information as being highly attractive.